Well this was a delicious treat for a weekend brunch. I used two slices of seeded bread, dipped in an egg white, cinnamon and vanilla mix then fried to perfection and served with maple syrup, berries and greek yogurt.

The lovely team at Two chick products sent me some of their liquid egg whites that I couldn’t wait to test out. Having egg whites so easily excessible means less mes in the kitchen and wasting the egg yolks! It also reduces the fat of the dish and ups the protein… win win!

A hearty weekend brunch. Cinnamon French toast, made with egg whites and served with maple syrup, berries and greek yogurt. 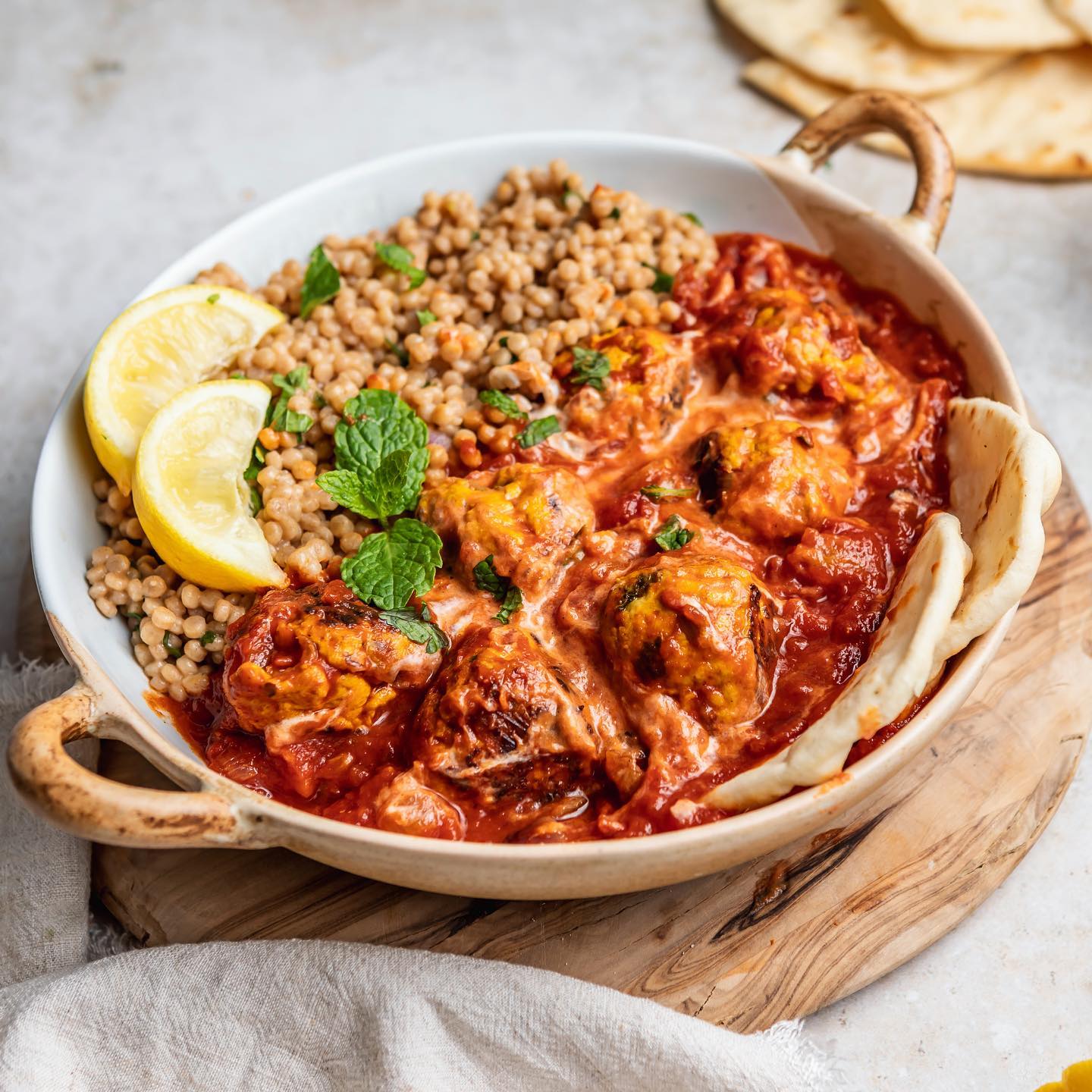 sarahshealthykitchen
•
Follow
MOROCCAN MEATBALLS WITH LEMON & MINT COUSCOUS The perfect Spring recipe for you to try. I loved using @heckfooduk Moroccan spiced chicken mince for this recipe as it already has the spices in the mince, making it quicker and easier! AD- previously paid to create recipes for Heck Serves 4 Ready in 45 minutes Ingredients 1 x 500g Heck! Moroccan Chicken Mince* 2 tbsp olive oil 1 red onion, diced Handful of fresh mint, chopped 2 tbsp tomato puree 2 x 400g cans chopped tomatoes 2 tsp smoked paprika 200g giant couscous 400ml chicken stock 1 lemon Flat breads, to serve Natural yogurt, to serve Method 1. Add 1 tbsp olive oil to a large sauté pan, once hot add the diced onion and cook for 5 minutes until soft, then tip into a large bowl, add the mince and a handful of chopped, fresh mint leaves. 2. Use a fork to combine the mince and onion, then roll into 15 balls. 3. Add the remaining olive oil to the pan, then add the meatballs and cook until browned all over. 4. Pour in the chopped tomatoes, tomato puree, smoked paprika and season well. Stir through and simmer for 15-20 minutes until thickened. 5. Meanwhile add the giant couscous to a separate pan, pour over the stock and simmer until all the liquid has absorbed. Remove from the heat, squeeze over the juice of half a lemon and add a handful of chopped mint leaves and stir through. 6. Serve the meatballs with the couscous, warm flatbreads, lemon and a swirl of natural yogurt. NOTES You can use plain chicken mince, simply add 2 tsp of Moroccan spice or Ras El Hanout
View on Instagram |
1/9 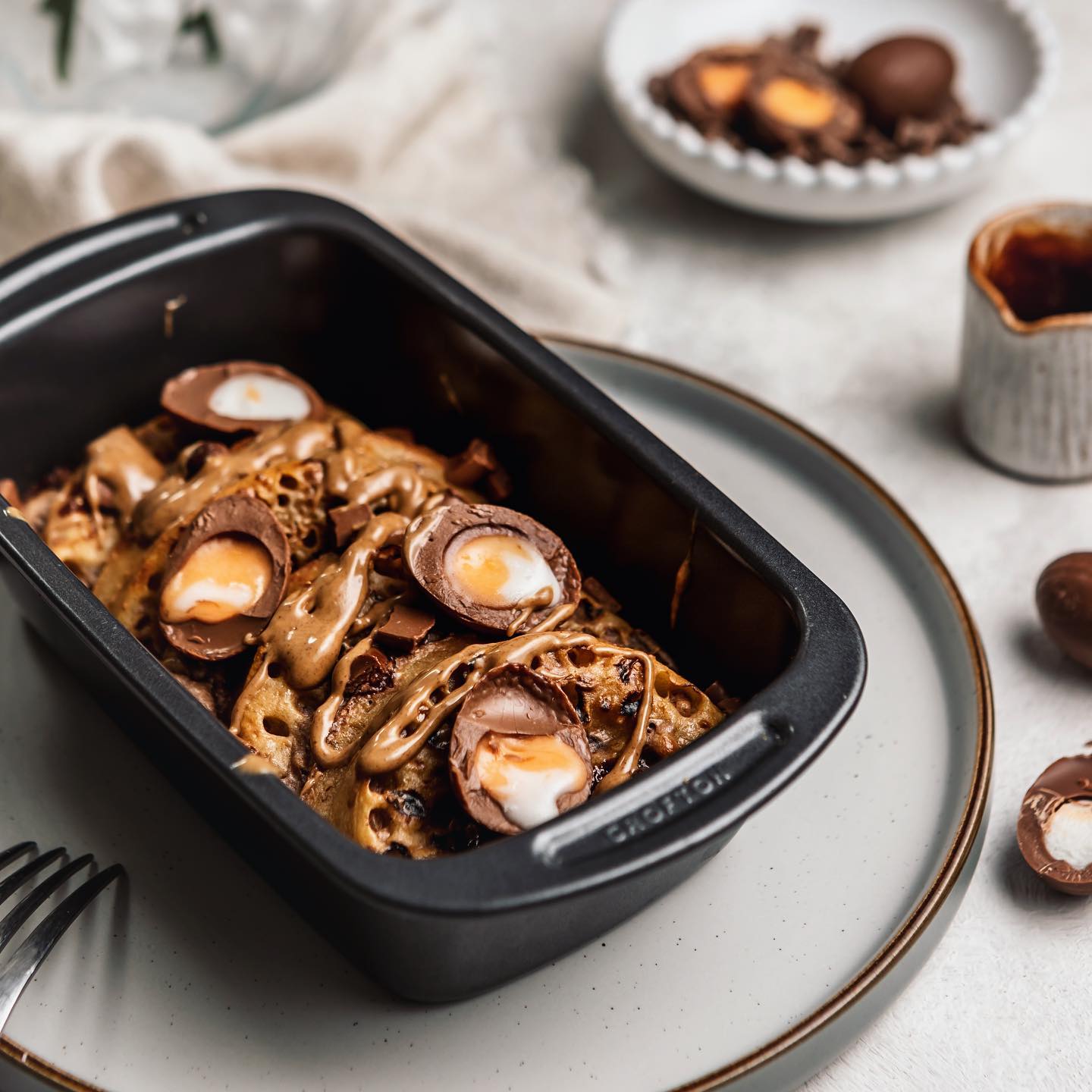 sarahshealthykitchen
•
Follow
Easter breakfast goals 🐣🙌🏻 I felt I had to share these Creme Egg baked chocolate crumpets after @warburtonsuk sharing my recipe. Have a great Easter everyone!! Here’s what you’ll need: 🐣2 crumpets 🐣15g chocolate protein powder 🐣1 medium egg 😅50ml unsweetened almond milk 🐣10g chocolate chunks 🐣2 mini creme eggs METHOD: 1. Preheat oven to 180c 2. Lightly toast the crumpets first if you prefer a crispier edge and cut them in half. 3. Spray a mini loaf tin with olive oil spray, then line the crumpets up. 4. Whisk together the egg, milk and protein powder and pour over the top of the crumpets. 5. Scatter over the chocolate chunks. And place in the oven for 10 minutes. 6. Remove, half the creme eggs, and place on top, then pop back in the oven for 5 minutes until gooey and melted! 7. I like to serve mine with a drizzle of peanut butter too! Kcal 428 Fat 12 carbs 55 protein 23
View on Instagram |
2/9 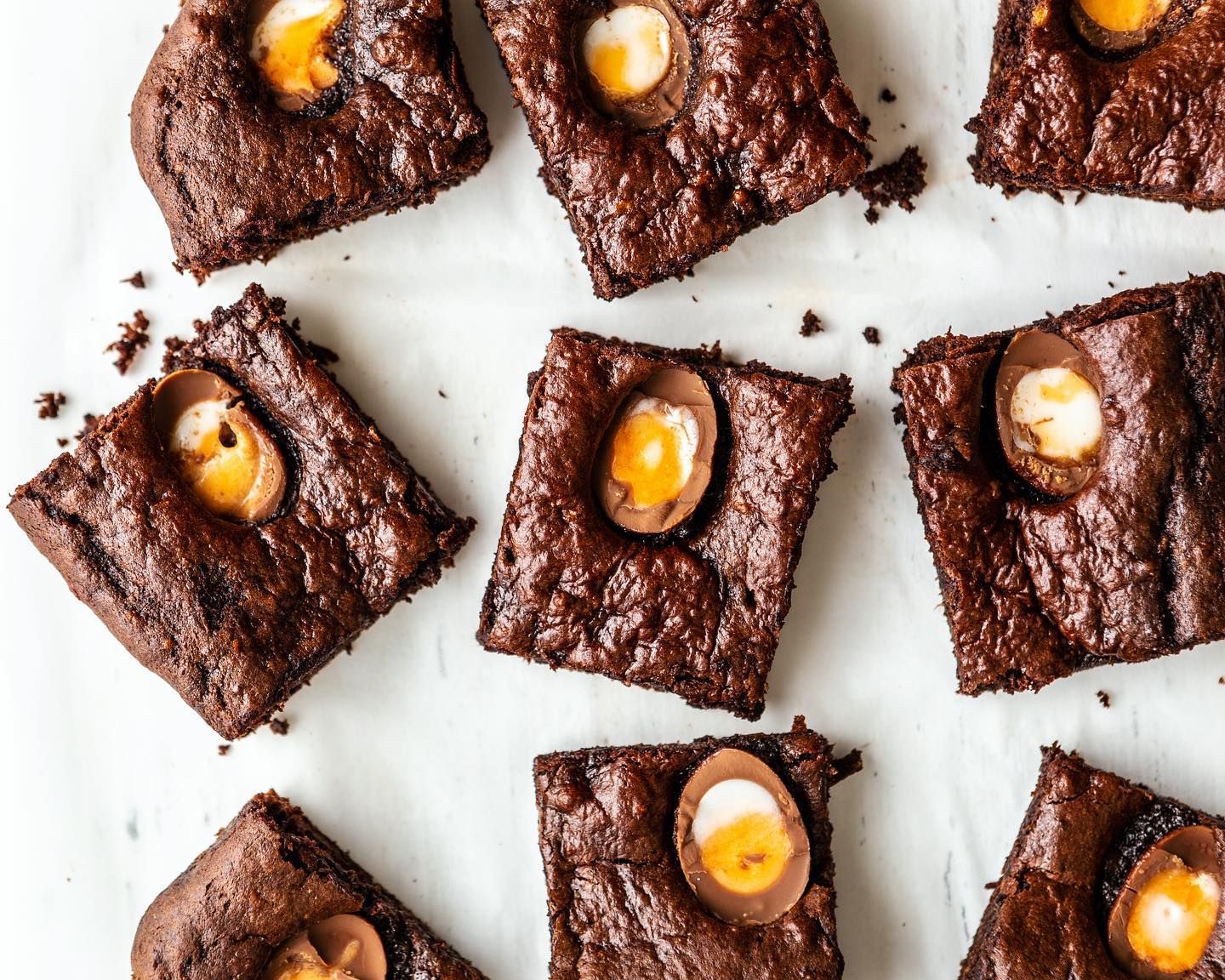 sarahshealthykitchen
•
Follow
Healthy Creme Egg Brownies I can’t believe this recipe is over 2 years old now but still a classic recipe of mine. I love utilising ripe bananas in brownie recipes. They provide moisture, sweetness as well as giving a fudgey texture too! I’d LOVE to hear your thoughts on this recipe. Hit SAVE to give it a try! Makes 12 I N G R E D I E N T S 3 ripe bananas, mashed 120g almond butter (or peanut butter) 1 medium egg 30g cocoa powder 80g granulated sweetener or caster sugar 1 tsp vanilla extract 1 tsp baking soda 6 mini creme eggs, halved M E T H O D ▪️Place the mini creme eggs in the freezer for 1 hour. ▪️Once frozen, cut each egg in half then place to one side. ▪️Preheat oven to 180°c and line a 20x20cm brownie tin with parchment. ▪️Mash the bananas with a fork until pureed and most of the lumps are gone. ▪️Add the almond butter and mix well, followed by the Natvia sweetener. ▪️Beat in the egg and vanilla extract until really well combined and the mixture has turned pale and has a little more volume to it. ▪️Fold through the cocoa powder and baking powder and mix until fully combined. ▪️Spoon the mixture into the prepared tin, levelling out with the back of a spoon. Then press each creme egg half into the mixture, spacing them out evenly. ▪️Bake for 20 mins, then remove from the oven and allow to cool fully in the tin. ▪️Once cool remove from the tin and serve. Calories 126 Fat 6g Carbs 13g Protein 4g
View on Instagram |
3/9 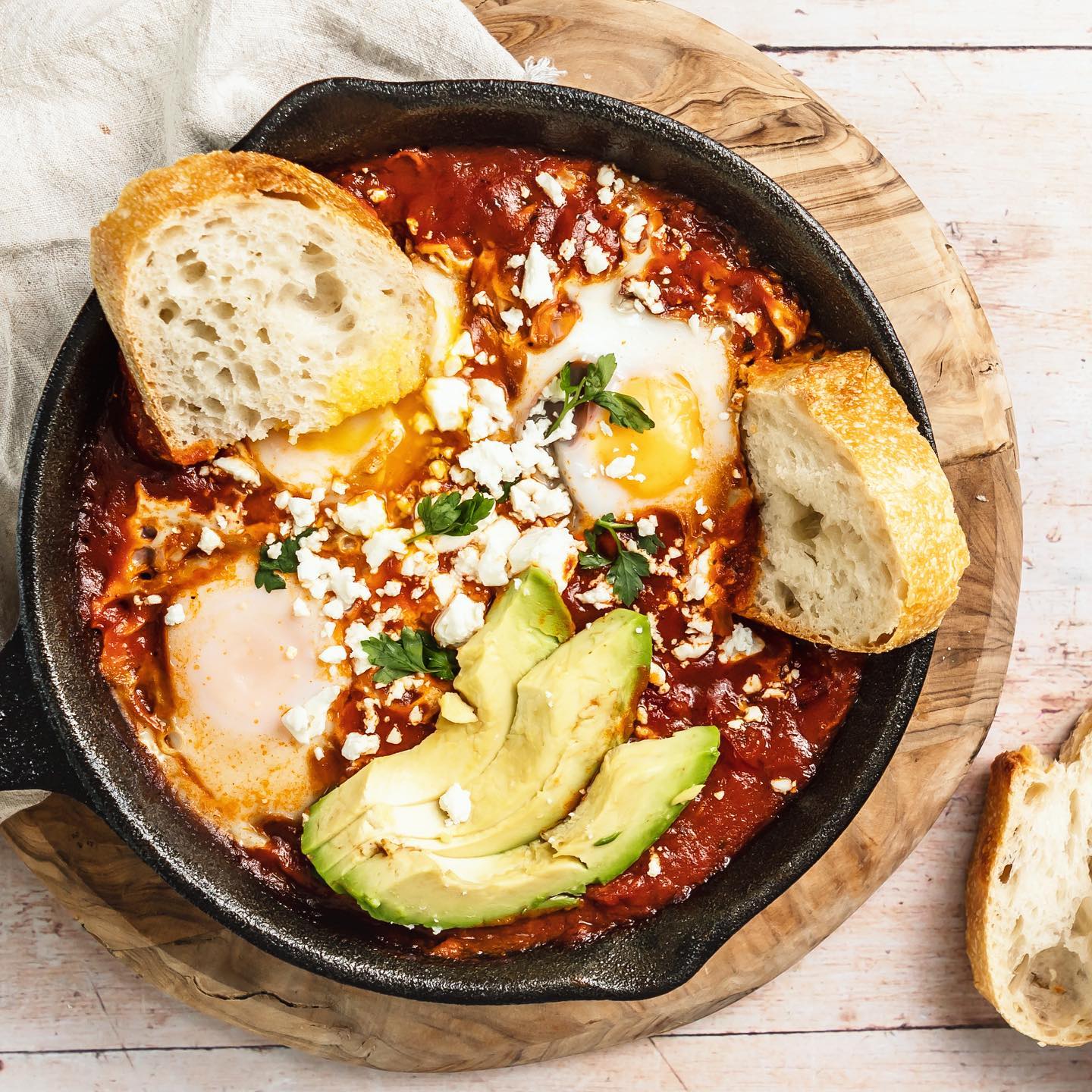 sarahshealthykitchen
•
Follow
Here’s my super speedy 20minute Shakshuka recipe! Topped with avocado slices and crumbled feta. Served with chunky slices of sourdough! Perfect for weekend brunch 😍. Hit SAVE to give this a try 💛 Serve 2 Ready in 20 minutes INGREDIENTS 1/2 tbsp olive oil 100g cherry tomatoes, halved 440g Tomato and basil pasta sauce (I used ZenB) 3 free range eggs 20g feta cheese 1 avocado, sliced Sourdough slices, to serve METHOD 1. Heat the olive oil in a small skillet or frying pan, add the cherry tomatoes and cook for 5 minutes until softened. Pour in the pasta sauce and stir through. 2. Make three wells in the sauce and crack in the eggs. Cover the pan with a lid and cook for 5-7 minutes until the egg white is starting to set and the yolk is gooey. 3. Place onto a serving board, crumble over the feta cheese and top with slices of avocado. Serve with fresh slices of sourdough bread for dipping.
View on Instagram |
4/9

sarahshealthykitchen
•
Follow
1st March and Pancake Day! If you’ve left pancake day a little late this year. Head to @sainsburys and pick up some @wearegriddle chocolate chip pancakes for guaranteed fluffy pancakes! I topped mine with a caramel peanut sauce, caramelised pecans and sliced bananas! If you want the full recipe of how I created these. Head over to my website. Link in bio 💛 (Not an AD just love the product) #pancakeday
View on Instagram |
5/9 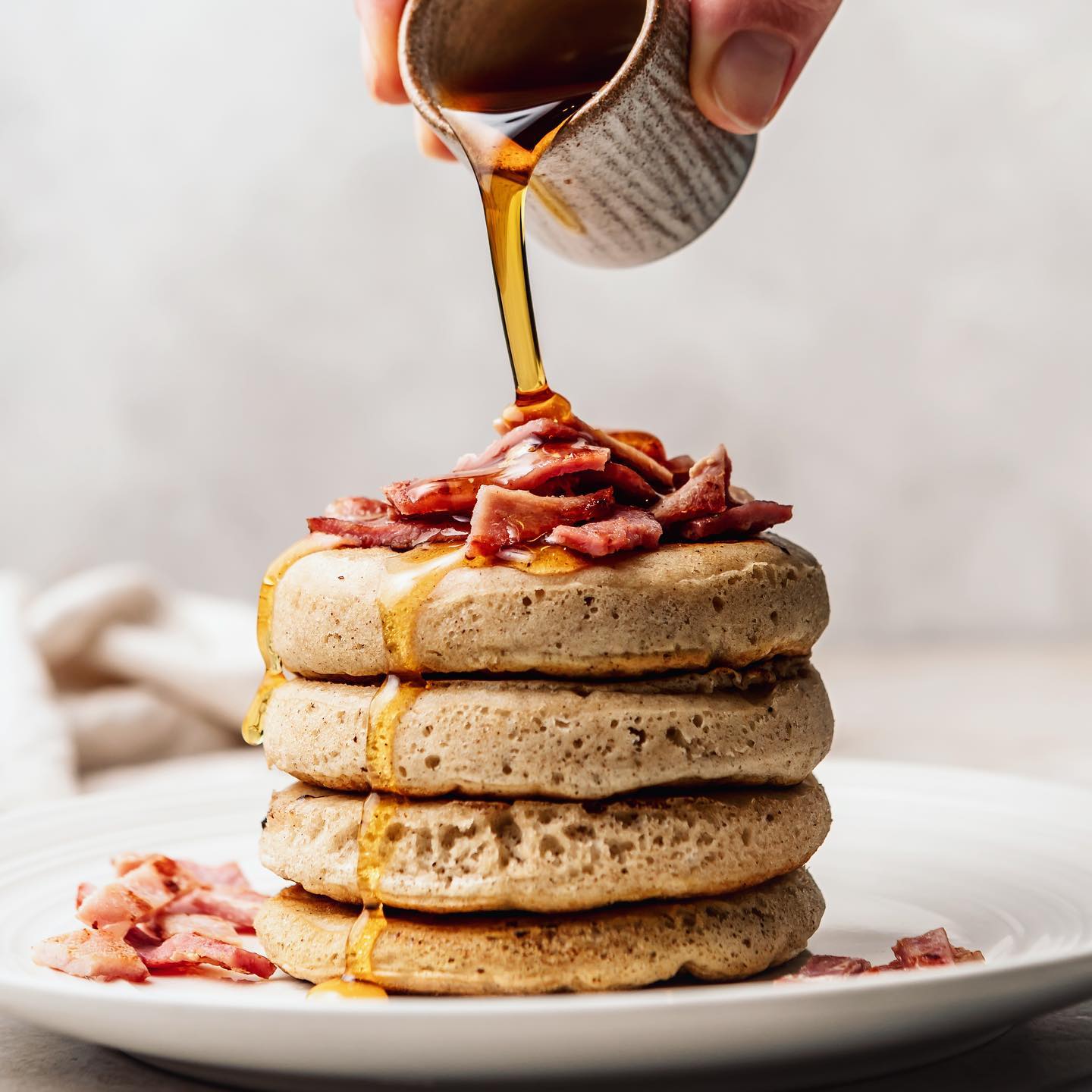 sarahshealthykitchen
•
Follow
A classic combo of crispy bacon and maple syrup on fluffy pancakes 🤤. What’s your go to toppings on pancake day? Do you make crepes or fluffy stacks? Let me know in the comments below ⬇️
View on Instagram |
6/9 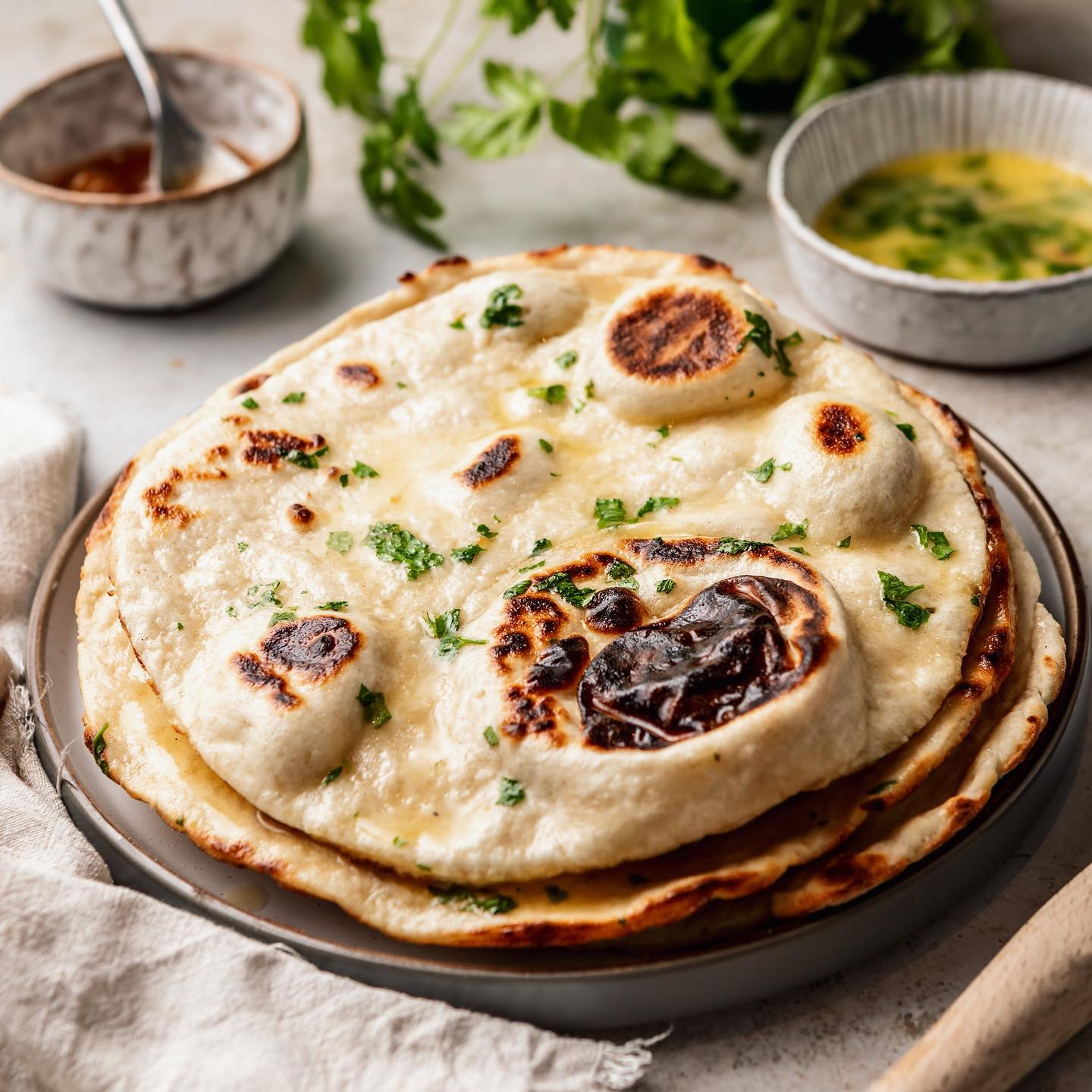 sarahshealthykitchen
•
Follow
SIMPLE 2 INGREDIENT FLAT BREADS WITH GARLIC BUTTER This #FibreFebruary, I’ve teamed up with @fab_flour for their #NourishingTheNation campaign to help spread the word about all of the fantastic nutritional benefits of flour. (AD) The aim of the Fibre February campaign is to celebrate fibre and encourage people to increase their fibre intake. This is part of a wider Nourishing The Nation campaign, which aims to reverse any negative connotations of eating flour-based products, to challenge the perception that flour is over-processed and to celebrate its nutritional benefits as a natural product. Did you know flour is an excellent source of fibre and an easy way to hit the recommended daily fibre intake of 30g. Dietary fibre has many nutritional benefits, including being incredibly important for digestive health, helping to produce good bacteria for your gut and helping to prevent coronary heart disease, diabetes and certain cancers! Makes 4 flatbreads INGREDIENTS 200g Self-raising flour or use wholemeal self-raising flour for even more fibre! 200g Greek yogurt 0% fat Olive oil, for cooking 40g Unsalted butter 1 tsp Garlic powder Handful of chopped fresh parsley METHOD 1. Season the flour with a pinch of salt, make a well in the middle, add the Greek yogurt and begin to stir together. Once combined, knead with your hands on a lightly floured surface until smooth. 2. Divide into 4 even balls and roll into a disc shape until 1/2 cm thick. 3. Place a frying pan on a high heat, once hot, lightly brush with some olive oil. Place the first flatbread into the pan and cook for 2 minutes on each side. Repeat with the remaining dough. 4. Once all the flat breads are cooked, melt the butter in small increments in the microwave, then stir through the garlic powder, fresh parsley and a pinch of salt. 5. Brush each flatbread with the melted butter and serve! Did you know that even white self-raising flour contains lots of fibre? This means that these tasty flatbreads each contain 2g fibre and 7g protein. Make sure you follow @fab_flour for more fibre-filled recipes and nutritional flour facts!
View on Instagram |
7/9 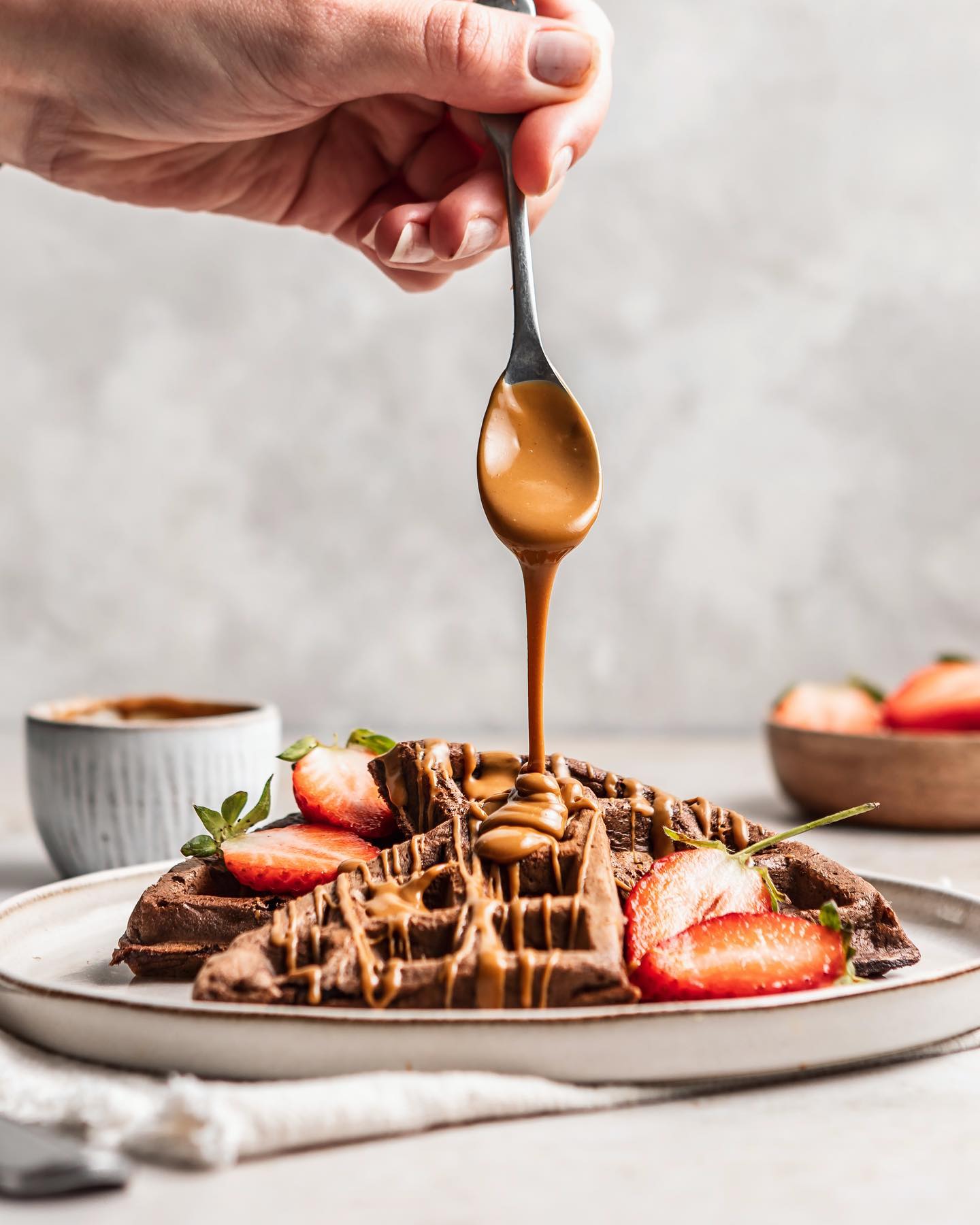 sarahshealthykitchen
•
Follow
CHOCOLATE & BISCOFF PROTEIN WAFFLES// It’s midway through the week and I’m already thinking about what breakfast I want this weekend. Even though making food is my full time job, having that extra time on the weekend to make something and enjoy it without having to test it, photograph it then eat it cold is something I really enjoy and nurture. What’s your favourite weekend breakfast you like to make? Hit SAVE on this post to give this waffle recipe a try! Serves 2 INGREDIENTS 50g self raising flour 2 tbsp cocoa powder 25g chocolate protein powder 1/2 tsp bicarbonate soda 1 tbsp maple syrup 1 large egg 120ml unsweetened almond milk TOPPINGS 40g Biscoff spread, melted (more if you’re a Biscoff fan like me) 80g sliced strawberries METHOD 1. Make sure the waffle maker is preheated and lightly greased. 2. Add all the waffle ingredients together and whisk until smooth and combined. 3. Slowly pour half the batter into the waffle maker and close the lid. Cook for around 5 minutes until risen and fluffy. 4. Melt the Biscoff spread gently in the microwave, then drizzle over the top and add the sliced strawberries. Per serving: Kcal 441 Carbs 46 Fat 18 Protein 23 Don’t forget to tag @sarahshealthykitchen if you give this one a try! 🤍
View on Instagram |
8/9 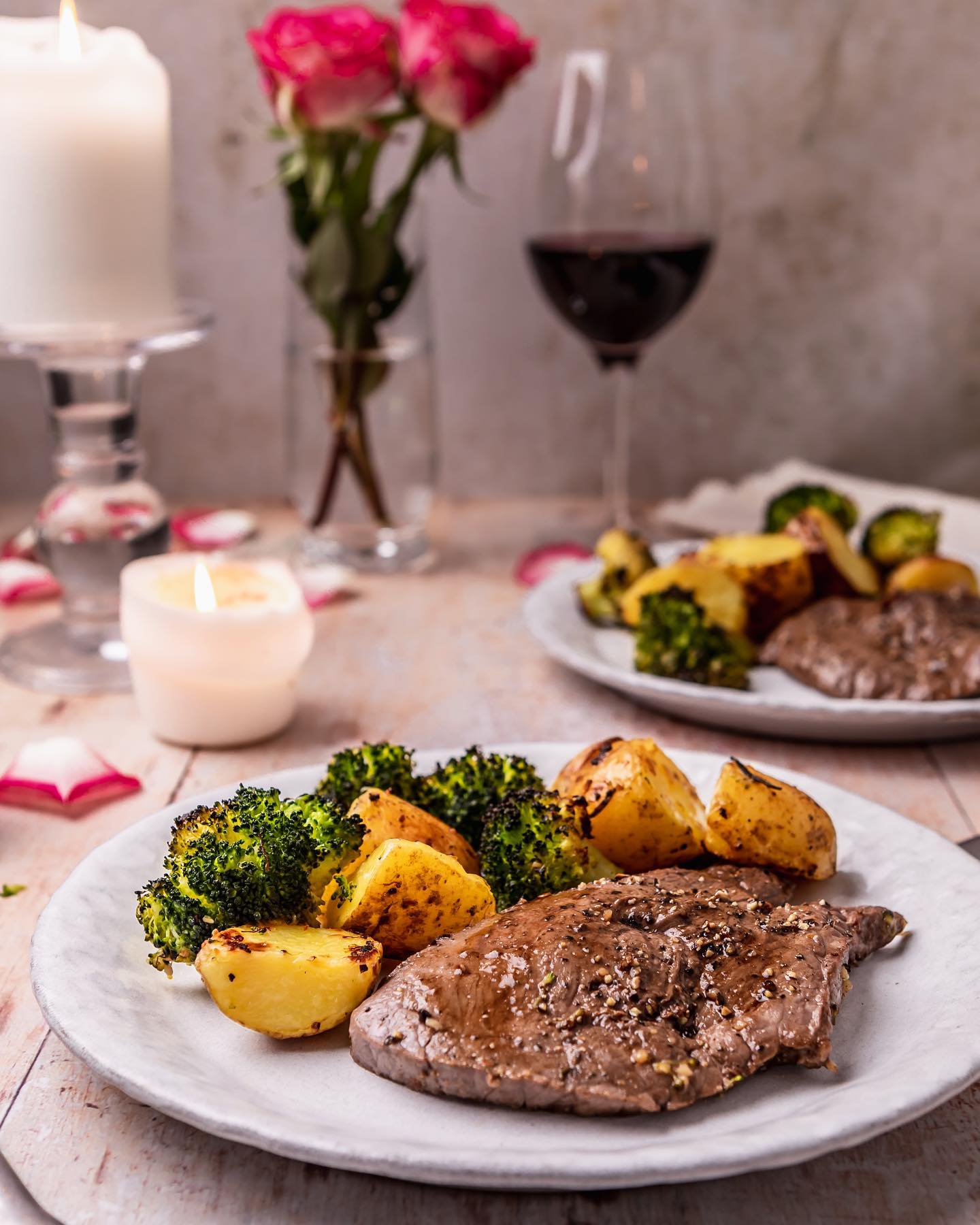 sarahshealthykitchen
•
Follow
The perfect valentines set up 🥰 This balsamic steak and crispy potatoes is a super quick and tasty valentines meal to try. Head to @believe.bykimfrench for the full recipe reel ❤️
View on Instagram |
9/9
View on Instagram
%d bloggers like this: